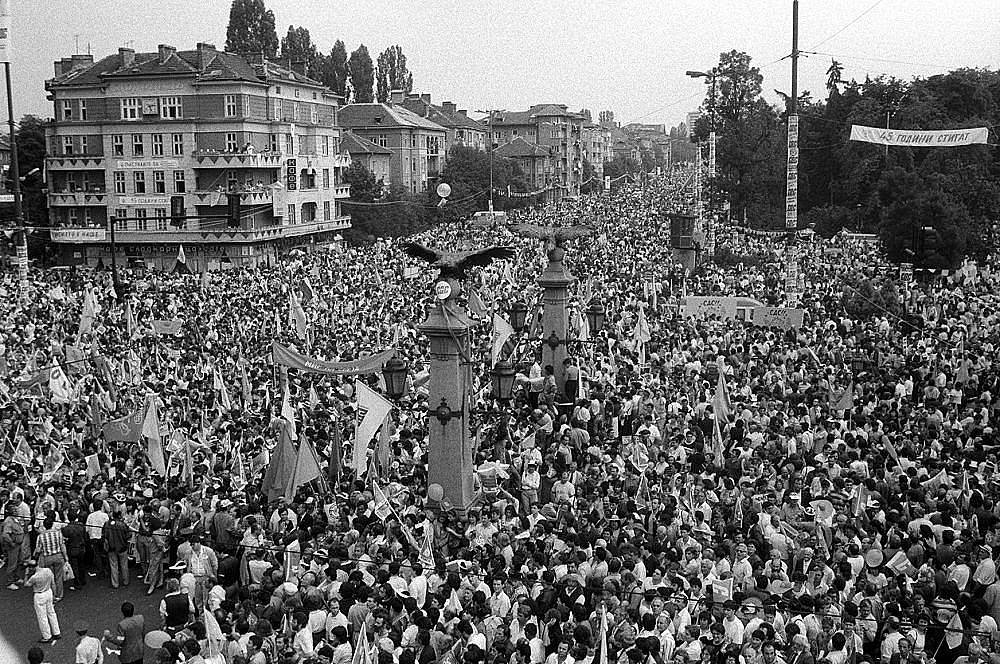 "We have statesmen who have no state, individuals who have no faces, politicians who have no politics, stores where nothing is sold, writers who do not write, elections where there is no free choice, a court that has been convicted, theft under the guise of privilege and privileges which are considered theft, we also have matches for which the outcome is known before the start, and crimes that are prosecuted before they are committed.” These are the words the Bulgarian writer and journalist Georgi Markov used to describe the communist regime of Todor Zhivkov in his essays Reports on Bulgaria in Absence.

After his books and plays were banned in Sofia, Markov emigrated to London, where he worked for the BBC since the early 1970s and broadcast his essays on the Free Europe radio station. In 1978, Markov was wounded on the Waterloo Bridge in a crime that became known as the "Bulgarian Umbrella." On September 7, which marks the communist leader Todor Zhivkov's birthday, an unknown assailant pricked the controversial journalist in the leg with the tip of an umbrella. Four days later, Georgi Markov died of ricin poisoning. The Bulgarian prosecutor's office closed the murder investigation in 2013 concluding that too much time had passed since the murder. 32 years after the fall of the communist regime, Georgi Markov's essays have still not found their rightful place in Bulgarian textbooks.

This story is a symbolic example of the way Bulgaria deals with its own past, especially when it comes to the period between 1944 and 1989. The country confirmed its allegiance to the USSR by joining the Council for Mutual Economic Assistance (1948) and the Warsaw Pact (1955). Todor Zhivkov, who supported the USSR and even proposed to Khrushchev in the early 1960s that Bulgaria should join the Soviet Union as the 16th republic, remained in power the longest.

The day after the fall of the Berlin Wall, on 10 November 1989, the Central Committee of the Bulgarian Communist Party voted for Zhivkov's resignation in a coup provoked by the Communist Party itself and former Foreign Minister Petar Mladenov took power. Democratic protests, held in the months before that and organized by the reform movement Ekoglasnost with the demand for cleaner air in the city of Ruse, were now officially allowed. Throughout the majority of big cities, the demonstrators insisted on the abolition of Article 1 of the Constitution, which gave power to the Communist Party in all aspects.

Mladenov was remembered in recent Bulgarian history for his remark "It's best for the tanks to come" which he uttered during a democratic protest held in Sofia on December 14,1989. However, the tanks did not come and did not take to the streets. A few days later, Bulgarians witnessed the bloody fall of Nicolae Ceaușescu in neighboring Romania but a similar scenario proved impossible on the domestic political scene, where a significant number of people was surprised by the sudden change of political leadership.

Despite the absence of military intervention in 1989, the transition in Bulgaria during the 1990s was full of dramatic events. Criminals ruled the streets and corruption dominated the privatization process. In 1996, former Prime Minister Andrei Lukanov was publicly assassinated. The factories were distributed to the selected few for only 1 lev. The annual inflation reached 310%. Nineteen banks went bankrupt and people lost their life savings with the collapse of security and order that communism had long provided them with. Democracy came hand in hand with an average monthly salary of 5 USD and frequent street riots. In early 1997, the financial and political crisis led to mass protests and the occupation of the parliament building on 10 January. The MPs were quickly evacuated from the parliament, while protesters kept entering the building and smashing its interior.

The transition has had a significant impact on the Bulgarian society and citizens are still not certain whether it has actually come to a close. This topic takes over the space of public debate every year around November 10 when Zhivkov was forced to resign by his part comrades. Meanwhile, the crimes of the totalitarian government have not yet been prosecuted and many aspects of the period before 1989 still remain without any social and political consensus. Decades after the so-called "changes", the issue of dealing with the past is still of secondary importance to Bulgaria's political elites.

Although in 1996 the Supreme Court overturned part of the verdicts of the so-called People's Court that legitimized political assassinations from December 1944 to April 1945, these verdicts are not well explained in history textbooks and some do not even mention them. In 2019, 30 years after the democratic changes, the communist period became triggered a discussion on changing the content of history textbooks two months before the start of the school year. One of the controversial claims was that "Todor Zhivkov had a moderate style of governing without serious repressions."

Ethnic Turks in Bulgaria would certainly disagree with this claim. The assimilation program introduced by Todor Zhivkov in 1984 aimed at the ethnic Turkish population was a mechanism of mass repression where people were forced to change their Turkish names to Slavic ones. Due to forced Bulgarianization in the late 1980s, about 350,000 Turks left Bulgaria.

Commemoration of the political victims on the island of Belene is another issue which arises social tensions. From 1949 to 1959, Belene was a camp for political opponents of the regime. Around 80% of the people sent to the camp were never officially convicted of any crime and a total of about 15,000 people were in the camp. The state leadership does not show any interest in commemorations.

While political analysts mark year after another in the transition process, some of the so-called “children of transition” are already having children of their own. However, they are still mostly unaware of events from the period before November 10, 1989. The results of a sociological survey claim that 94% of young people between the ages of 16 and 30 know almost nothing about that period of Bulgarian history.

Like in other cases, the attitude towards the past in Bulgaria depends on that who is in power. This can be best observed on the occasion of anniversaries such as November 10. It seems that discussions on the historical curriculum will continue taking place on a political level instead on the scientific one as long as society is divided. As for the "children of transition", for them, Zhivkov is just a character from a rap song based on parts of his speech. In a way, the question is closed before it was even opened.